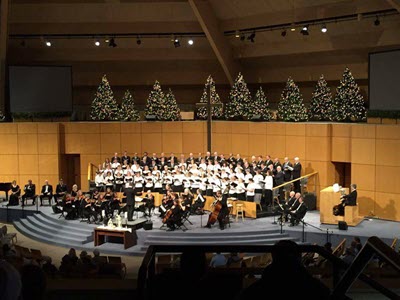 A live performance of Messiah was presented on Sunday, November 21, 2021 at 2:30 pm, Grace Church, Morton, IL.  The pre-concert organ prelude was by Dr. Sherry Seckler.  Plans are in the works for next year's concert scheduled for Sunday, November 20, 2022, Lord willing.

Listen to the wonderful radio spot produced by and played on WBNH Radio, 88.5 FM prior to the 2021 concert! Thank you, Jim Huber, Daniel Cushman and WBNH! Listen here.

Our annual concerts are held at Grace Church in Morton.  Although Grace Church graciously allows us to use their beautiful sanctuary, our annual productions of Messiah are community events, performed by the Morton Community Choir and Orchestra.  The concerts are free, and no tickets are required.  The majority of our support is received from concertgoers through a free-will offering at the doors.  You can still give online using the Donate button above.  Money received throughout the year is put toward the following year's concert.  (Online donations are being handled for us through the Morton Fine Arts Association.) We also want to thank the following business sponsors for their help in underwriting the 2021 concert:​

Edward Brennan, Tenor - Emerging American Tenor Edward Brennan’s voice has been described as ”fierce” and having a “baritonal” quality. An Illinois native, he has had the pleasure of performing with companies across the country. Having made his debut with Utah Festival Opera in 2017, his other appearances include Cedar Rapids Opera Theater, Opera Modo, Sinfonia da Camera, Sinfonietta bel Canto and the Danville Symphony Orchestra. In 2019, Edward joined the Institute for Young Dramatic Voices. A program founded by renowned Metropolitan Opera Mezzo-Soprano Dolora Zajick.  Specializing in spinto and dramatic repertoire,  roles to his credit include Pinkerton from Puccini’s Madama Butterfly, Enzo Grimaldo from Ponchielli's La Gioconda, and Luigi from Puccini’s Il Tabarro. Edward is under the tutelage of tenor Harold Meers.

Stephen Williams, Baritone - is a self-employed contractor and custom builder with a bachelor’s degree in engineering from Bradley University. As a Bradley student, Steve sang with the Bradley Chorale and Community Chorus. He studied voice with the late Dr. John Davis of Bradley University and now studies with Jerry Siena of the University of Illinois at Champaign – Urbana. He has served as Pontifical Cantor at The Cathedral of Saint Mary of the Immaculate Conception in Peoria from 2000 to present. Steve was awarded both honorable mention in 2000 and first prize winner in 2002 in the adult division of the NATS (National Association of Teachers of Singers) competitions. Steve has been a repeat soloist with Saint Martin Chamber Group and Chamber Players, Dramatic Crossroads, and Bradley Community Chorus. He has performed the baritone arias in oratorios including multiple productions of Handel’s Messiah, Mendelson’s Elijah, and Faure’s Requiem. Steve has performed excerpts of several operas including those of Le Nozze Di Figaro, Don Giovanni, Die Zauberflote, Il Barbiere Di Siviglia, Rigoletto, La Traviata, Pearl Fishers, and played the lead role in Menotti’s “The Telephone”.  In 2018, Stephen debuted the role of Boaz in Ruth – A New Musical by David Getz to great acclaim.
Dr. Sherry Secker, Organist - Sherry Seckler studied piano under Randolph Hokanson at the University of Washington where she earned her B.A. in Music degree.  As a married graduate student she played organ for a small church in Las Cruces, NM, to augment the meager household budget.  One job led to another and in Peoria, IL she decided to take organ lessons so she could play concert organ music.  An intense two-week session with concert organist Wilma Jensen (12 hour-long lessons in 13 days) was the first step leading to a Masters of Music in organ under Jerald Hamilton at the University of Illinois followed by a PhD in Organ Literature at the University of Iowa under Delores Bruch and Delbert Disselhorst.  She has performed in France as part of the Summer Institute for French Organ Study and received a grant for further study on period instruments in France.  She has held various organist positions in the area including Director of Music for St. John’s Catholic Chapel at the University of Illinois and Director of Music/Organist for St. Mary’s Cathedral.  Currently she is Director of Music/Organist for St. Vincent de Paul.